Factorylink software. The Fool is the debut studio album by American alternative rock band Warpaint, released on October 25, 2010, on Rough Trade Records.[1] The album was recorded at two studios—Curves Studio and The Boat Studio—in the band's native Los Angeles, California, throughout 2010 and was produced by Tom Biller, who also shared mixing duties with Andrew Weatherall and Adam Samuels.[1]

The band describe the album as the 'older sister' of their debut, Exquisite Corpse (2008).[2]

The latest AMD Radeon Windows 10 driver is the (Released 2018-8-06). Most AMD/ATI Radeon HD GPUs are supported in Windows 10 with these drivers, including those in the R9, R7, and R5 series, plus others. Download sansui sound drivers. These drivers are also called the AMD Catalyst Drivers and they include everything you need for your AMD/ATI to work in Windows 10. This includes both desktop and mobile GPUs.

The Fool was released on October 25, 2010, in the United Kingdom and the following day in the United States.[1] The album was previewed before its physical release through an exclusive stream on The Hype Machine on October 18.[3] The album was promoted by two singles—'Undertow' and 'Shadows'—released on September 21, 2010[4] and January 10, 2011,[5] respectively. Both singles received moderate acclaim, though did not chart. In March 2011, 'Undertow' and the Neon Lights remix of 'Shadows', featured as the single's B-side, were featured on a playlist by BBC Radio 1 as part of the In New Music We Trust[6] and 'Undertow' was exclusively re-released in April 2011 as part of the international Record Store Day.[7] On September 26, 2011, less than a year after its original release, a deluxe edition of The Fool was released, featuring two bonus tracks and a second disc with Exquisite Corpse.[8]

In 2011, The Fool was awarded a silver certification from the Independent Music Companies Association, which indicated sales of at least 20,000 copies throughout Europe.[9]

Upon its release, Warpaint embarked on a tour of Europe to promote The Fool. The 21-date tour lasted from October 21 to November 15, 2010, and the band performed in Ireland, the United Kingdom, Belgium, Germany, Denmark, France and the Netherlands.[10] Following the tour, the band also performed seven shows throughout the United States, beginning in St. Louis, Missouri on November 19 and concluding in Los Angeles, California on December 12.[10] On January 31, 2011, the band began a third leg of the tour in Australia and New Zealand, lasting until February 12.[11] On February 21, the band performed a one-off show with Twin Shadow at O2 Shepherds Bush Empire in London as part of the NME's award shows[12] and in March and April, the band began another leg throughout the United States, beginning in San Francisco, California on March 16 and concluding in Indio, California on April 15.[11] They also played at various major festivals including Bonnaroo, Glastonbury Festival, Reading and Leeds Festivals, Coachella Valley Music and Arts Festival, Rock Werchter and Electric Picnic in support of the album.

Upon its release, The Fool received critical acclaim. At Metacritic, which assigns a normalized rating out of 100 to reviews from mainstream critics, the album received an average score of 77, based on 33 reviews, indicating 'generally favorable reviews.'[13]AllMusic's Heather Phares said that 'The Fool has flashes of brilliance' and 'darkly feminine songs with instinctive structures'.[14] Jason Heller of The A.V. Club noted the album 'coasts instead on a humid, hazy, oozing pulse that's less ice age and more malarial swamp' and 'with a torpid and feverish dreaminess'.[15] Writing for Consequence of Sound, Philip Cosores called it 'a genre record for a genre that doesn't exist' and admired the album's production, stating 'though the guitar leads sound unpolished, the vocals sound untrained, and the bass can overwhelm the songs, the lack of perfection makes more of a statement than all the auto-tune in the world.'[24] Andrzej Lukowski, in his review in Drowned in Sound, said 'there is an incredible level of detail and accomplishment to The Fool'[25] and Jenny Mulligan of Entertainment.ie described the 'haunting atmosphere' of the album as 'wholly intoxicating'.[26]

Filter reviewer Laura Jespersen described The Fool as 'uncomplicated, psychedelic indie-girl rock with plenty of hazy guitar and a swooning, restrained sadness';[27]Hot Press also described it as 'psych-rock'.[28] In The Guardian, Maddy Costa noted 'it's the consistent sensuality of Warpaint's sound that makes them mesmerise.'[17]NME's Laura Snapes wrote 'the dark purple rumble and hypnotic coo of their vocals swim along, dragging the listener beneath its beguiling surface into a swathe of subtle time changes and guitar prone to sudden swan dives into heart-stabbing gold arcs from oil painting-thick landscapes.'[19]Pitchfork writer Ryan Dombal referred to The Fool as 'a nine-song seance of an album that's as subtle as it is disquieting' in his review[20] and Chris Martins of Spin summarized that 'The Fool is built on Joy Division's post-punk low end, moody chords, droning vocals, and doomy lyrics, but it's more than a tribute.'[23]

All tracks written by Warpaint.

All personnel credits adapted from The Fool's album notes.[30] 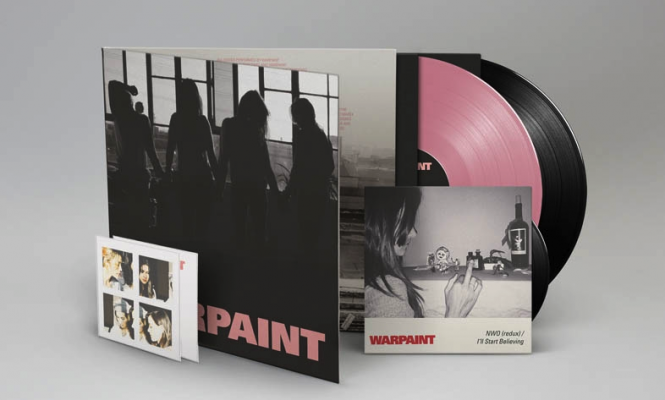